I have finally managed to sit myself down and finished this short travel log of the May-end hike in Grenoble. Silviu was in Grenoble for a one-day conference on Friday. We extended the stay till Sunday so that we could do a little sightseeing in this southeastern city of France. More importantly, to explore the surrounding mountains.

Grenoble, a city surrounded by mountains

Grenoble sits on the alluvial plans of the River Isère and River Drac, at an altitude of 214m. The city is flat, but mountains surround it. What I find fascinating about the city is that, regardless of where my position is in the city, when I look up, I can always have a glimpse of either the foreboding angular greyish blocks of Vercors Massif in the east and south, Chartreuse Mountains in the north, or the snow-caped Belledonne Range in the east.

Unlike the trip to Vosges which we made at the end of April, we were blessed this round with a splendid weather. It rained the following day when we left for Paris. The following week was a week of rain and floods in France.

We had planned a run of 40km, 2,400m/D+ in Chartreuse Mountains, and we achieved our goal. It was an exhausting, quads-destroying 9 hours. It has been close to 6 months since I left Hong Kong and was the last time that I did any proper training with elevation. Not counting our Vosges trip which was mainly a resistance training trip – trawling through snow piles.

Hike up to Bastille

From the centre of the city, our first climb was to get to Bastille, a fortress standing at sea-level of 476m. The first part of the Bastille climb was on a serpentine gravel path (I counted that there is at least 10 bends), escalating 250m/D+ in less than 3km, and followed by a flight of steep high, concrete steps before reaching the fort.

At 10am on a Saturday, there were already many runners descending from Bastille, I assumed, finishing their workout and ready to enjoy the rest of their day leisurely with their families and friends. There were also others, like us, who started later, and now jogging/fast hiking (us) up the serpentine path.

On our way up, we passed a group of seniors with hiking poles practising “nordic walking”. It’s a popular sport in France where one fast walks with hiking poles. They were being briefed by a group member, and seemed ready to start their workout. Do not be taken in by their ages. This group of seniors was very deft with their hiking poles, and soon enough, we could hear the “click, click, click” sounds of the poles on the gravel, and they were hot on our heels.

We had initially planned a steady hike up Bastille so as to preserve our energy for the 40km. However, the tapping sound sounds of the hiking poles kept us on our toes, reminding ourselves not to slow down and be overtaken by them (which would be quite embarrassing).

Unfortunately, we could not hold our fort as a bespectacled, sinewy-looking gentleman in his sixties zoomed past us. With a deep look of concentration set on his face, he propelled his hiking poles, alternatively, forward and backward, creating a fluidity that was a sight to behold. We were not obliged to keep up with him as the gentleman steered his powerful weapons to a direction opposite from ours, at the junction just a few metres away.

After the zigzagging across the countless bends of the serpentine path, we reached a steep flight of concrete steps that took us straight to the entrance of the fort. At the entrance, we took another flight of steps into a long tunnel, lighted up by the powerful lamp on the tunnel roof. This is the way to the Mandrin Caves, a network of caves excavated in the cliffs of Mount Jalla in front of the fort, built in 1844, served as part of the defense system of Bastille.

Following are some photos we took on the way:

We were famished by the end our 9-hour run. Our recovery was two upsized MacDonald meals and we ate them at the hotel. We then topped up with some recovery drinks at St. Andre Square. 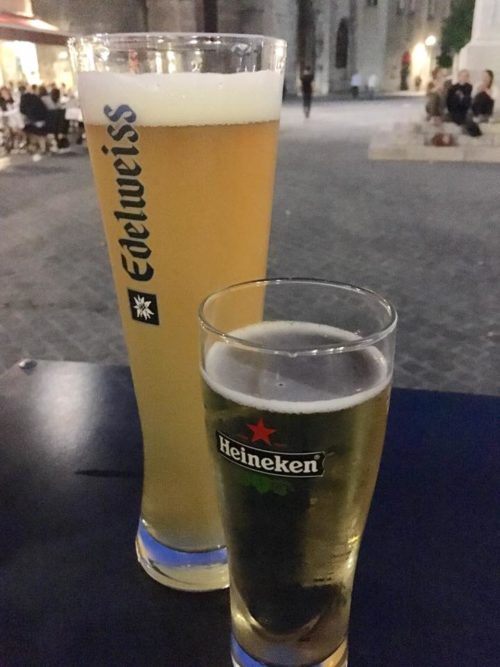